Saying goodbye to a queen... 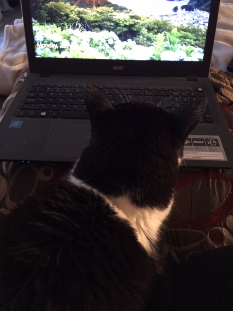 This is so hard.

Saying goodbye to a pet is the hardest part of having one in your family, but they bring so much joy to your life that we accept this eventuality though it literally breaks our heart.

Cookie was no exception. She defied unbelievable odds to live a long and fulfilling life as part of my family. In fact she chose me to be her pet mom, and I am forever thankful. This is our story.

Twenty years ago I was living in Ladysmith B.C. I was single and starting to write in my spare time as well as work full time. I lived in a rancher outside city limits on a one acre parcel of land. I had six neighbors and the one next to me had five acres. The railroad tracks ran along the back of the properties and the day liner went by daily, running up and down the island. I had two cats and a two dogs at the time.

One day I noticed this tiny black and white cat cuddling with my other cat Taz. She was sleeping on my sundeck chair with him. I assumed she was a neighbors cat at first, but after a week of her eating my cats food and sleeping with them on the deck, I realized she was on her own.

It took two months for her to let me pet her as she was essentially wild. Once she was allowing me to touch her, I called the SPCA to see if she belonged to anyone. They said there had been a influx of stray cats and that they doubted she belonged to anyone and if I brought her in she would likely be put down. I said I couldn't do that, and agreed to keep her. The SPCA said they would fix her for me if I would pay for her shots and that's what I did.

When I took her to the vet to get fixed, they told me she was about six months old and would start breeding soon. She was tiny for her age, but healthy.

Two months later my neighbor (the one with a five acres beside me) asked where I got the black in white cat. I told him she showed up a few months ago and my story with the SPCA. He nodded and said he knew where she came from.

He had found a box of dead kittens by the railroad track a few months before.  They had died of starvation. They were all black and white and looked just like Cookie. Cookie it seems, climbed over her brothers and sisters and pulled herself from the box.

A year later I was working in my office which was a few miles from my house. My neighbor called me and said "Tia don't freak out, but your house is on fire." I looked toward my house and though it was miles away I could see the smoke billowing in the air. I rushed home to find firetrucks everywhere and my home destroyed. That was Sept 6 2002. Five days later the world would be crying with me.

My dogs perished in the fire as did everything I had ever written. There was no icloud back then and floppy discs were no match for a 3800 degree fire. While I was crying as I shopped for a toothbrush and a change of clothes for the following day. I owned nothing except for what I was wearing, but my cats had survived, they had jumped out an open window.

While my elderly cats moved into the apartment I rented while I rebuilt my house, Cookie would not allow me to catch her. She still had a wild streak and I was forced to go to my yard  and feed her on a daily basis.

Fortunately, I was fully insured and had a new house a few months later, but I was still devastated over the loss of my dogs. While I miss having my grad ring and pictures from my childhood, losing them in this manner was far more traumatic. That's when the presents started.

Many pet owners get these kinds of presents and they aren't always appreciated. The first dozen or so headless moles, rabbits and birds weren't so bad. I did try and appreciate the creative ways and locations Cookie left these presents for me. When she started bringing me home bats and woodpeckers, I had to draw the line.

I caught her running in the backyard with a woodpecker in her mouth. I yelled and startled her, causing her to drop her intended present. I believe that was the first time she cussed me out. I'm pretty sure I would not have approved of her language choices had I been able to speak cat. Needless to say, she never brought me home another woodpecker.

Later I got married and had children. I worried that she might scratch them as she had never been exposed to kids, but she never scratched them when they were toddlers. Once they were teenagers and she was older, she had no problem 'explaining who was boss' if they didn't respect her authority.

As she aged she became more of a homebody and took an interest in my writing. She would sit on my lap and often walked across my computer to add her own flavor to my books. She loved human food and always showed up at the dinner table for her share of the BBQ chicken. She got a little impatient the last few years and stopped waiting for us to give her a piece. She would jump up and demand her portion.

In the end she passed away quietly in her sleep, loved by her family and missed by her pet mom. I tell my children that while pets seem to be a short part of our lives, we are all of theirs and I am thankful she chose me to be part of hers.