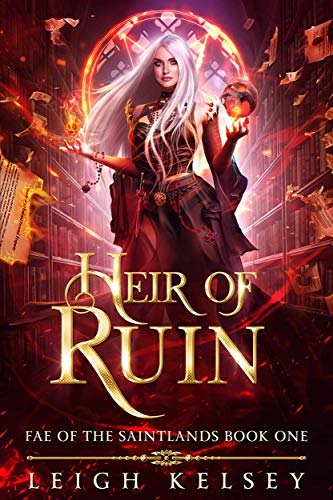 There’s no place for mercy in the palace of cruel fae...

Maia Delakore is her aunt’s secret weapon. With her snaresong magic, Maia twists the minds of the fae court, and smothers any resistance to the queen of the Vassal Empire’s reign. But when her aunt commands her to kill a fae prince, Maia refuses.

And flees into the arms of the crown’s worst enemy—the Sapphire Knight.

The crown will pay for what they did Azrail’s parents...

Azrail and his sister are all that’s left of a family framed for treason. As the Sapphire Knight, he and a small band of rebels wreak havoc on the queen’s plans, sparing those sentenced to death, and sneaking the hunted beastkind—shapeshifters with an animal form—out of the City of Skies. But when they save a young girl with a rare, powerful magic, Azrail and his friends are drawn into a plot laid by the saints themselves.

A plot that will draw Azrail and Maia together, sparking a love that will become legend.

Fantasy romance readers will devour this fated mates, enemies to lovers series inspired by Hades and Persephone, with a kickass princess, a snarky fae lord, a seductive prince, and a sweet jaguar shifter. Blood and Ash and Throne of Glass readers will fall in love with the Fae of The Saintlands.