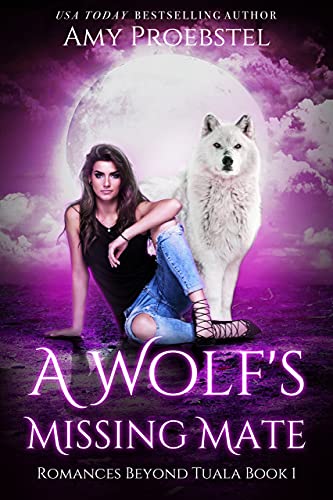 She’s a werewolf trapped in mourning. He’s an alien haunted by duty. Will their out-of-this-world love spark scorched earth or something spectacular?

Marika Edgewater goes on solely for the sake of her child. Suppressing her inner animal since her husband’s tragic death, her wolf is unleashed when a run-in with a vicious biker gang leaves her with a mortal wound. And when she collapses back into her human form, she’s shocked when a devastatingly handsome stranger heals her with his mysterious power.

Evan wants to live on his own terms. Fleeing obligations on his home planet and rejoicing in his newfound freedom on Earth, he’s stunned when he stumbles across a woman who’s been fatally stabbed. And though he swore to keep his extraterrestrial nature secret, he uses his healing gifts to save her life… and binds them as fated mates.

As Marika struggles to abide by the laws against outsiders, she fears for her growing bond with a non-shifter as rivalry and clan politics threaten to tear her world apart. But Evan refuses to abandon the family he’s found in the beautiful mother and her son, even if it means dying by fang and claw.

Can the embattled couple survive to claim a destiny that’s written in the stars?

A Wolf's Missing Mate is the magical first book in the Romances Beyond Tuala fated mate shifter series. If you like resilient heroines, compassionate heroes, and clean romance, then you’ll adore Amy Proebstel’s ferocious tale.