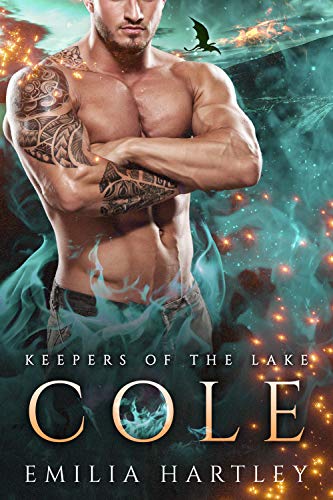 He guards a secret. She means to discover it.

Cole Barton is a sentry, living alone at the edge of a lake, keeping away all who would run afoul of the monster that lurks beneath its depths. At least, he keeps all away until Jude Drake arrives and refuses to be run off. The sexy, powerful, gold dragon shifter is more than a match for his own giant beast, and she seems intent on uncovering the secrets he wants to keep hidden. Even more unsettling, the lake monster is calling her, wanting to use her to break free from the sorcery that imprisons him. Cole would never allow his old leader to do that to any woman, but he’s particularly insistent that Jude not fall prey to the monster’s trap. Something about the gold dragon calls to Cole’s soul. The lake monster can’t have her. Cole will see to it, even if he has to deny his own heart and push Jude away.

Never again will he lose anyone he cares about to the monster.

Jude Drake knows why her cousin keeps sending her off to settle trouble around the country. Two gold dragons are too many for a single territory. Jude wants to settle down, though. She’s tired of her nomadic life, tired of cleaning up problems she had no part in making. She needs her own ground to rule, and with this lake territory she’s come to, she thinks she might have found it. The ground speaks to her, and she can see herself putting this broken clan back together. This is where she belongs, she’s sure of it—on this lakeshore, with this surly cabin rental manager.

Now if only she could convince the man and the land to give up their secrets and let her make her place here, she’s sure she could be happy.