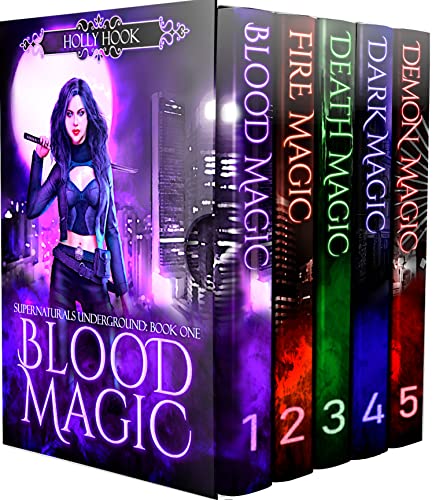 The first five books of the Supernaturals Underground Series is now available in as a complete series in one boxset! Begin binging a young adult urban fantasy series with heart-stopping adventure, shocking secrets, dark magic, and slow-burn romance!

Ever since a horrifying incident that got me turned into a vampire at two, life has been hell. My mother disowned me, and I can barely have friends or attend school. And if the authorities find me out? I’m toast.

I thought moving to the city would help me blend in, but boy, was I wrong. When the authorities catch on to me, I get kidnapped…um, rescued by Xavier Lovelli, an impossibly hot Mage who’s full of himself. He’s also a roper for Supernaturals Underground, a magical, hidden city.

At least here, I don’t have to hide anymore. But I must earn my keep. Supernaturals are going missing all over the city, including my father. The demon mayor is rounding us up for some diabolical plan, and the Underground wants me to help them fight.

Oh, and Xavier has magically bound me to him so that we’re forced to fight together. What the hell? Time to knock him down a notch.

Or maybe I won’t have to. Xavier’s got his own scars, and we have bigger things to worry about. Turns out, I’m wanted personally by the mayor and special, and that’s never good news in the Supernatural world.