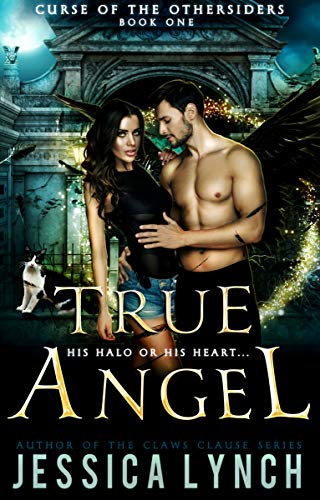 It always used to be: halo or horns? Before long, though, Cam’s left wondering: his halo or his heart?

In a world where paranormals live side by side with humans, mortals get one look at Camiel and think that he’s an angel… until his black wings unfurl and it’s all, “Oh, no! Demon!”

Cam is an Othersider. Which, okay, just means that he’ll eventually be one of the two… just not yet. Formally known as the Fallen, Othersiders walk—and, yes, sometimes fly—among the humans, knowing that their every step, their every move, their every thought adds to their tally. If he’s good, he’ll finally earn his halo.

He’s working damn hard to resist any urges to be bad.

It’s a good thing he has his auditor at his side. Dina might look like a neighborhood stray, but it’s the cat’s job to help Cam get the points he needs to go from Fallen to Angel. And it’s working… until Cam meets Avery.

Avery is human, she’s in trouble, and Cam decides that she needs her very own guardian angel. If he can help her save her sister from the feral shifter that ran off with her, then maybe he’ll finally prove that he’s a good guy.

If only it was that easy. Because Othersiders? There’s a reason why they’re stuck on Earth, working hard to prove where they belong: they’re cursed.

So when it comes to falling in love? There’s one rule.

Now Cam is losing his feathers at an alarming rate. In the middle of his mission, Dina disappears. Avery is a temptation he can’t ignore, and when he doesn’t, that’s when all hell breaks loose.