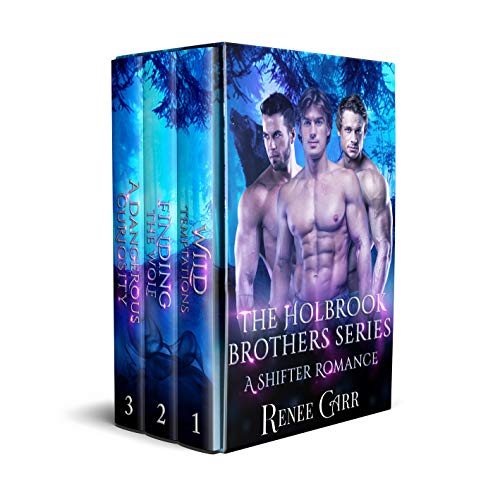 Nothing ever happens in the small town of Galena. Or that was the way it used to be.

Three hot brothers enjoy their work and each other's company, taking advantage of nearby parks for camping and fishing expeditions. But things go awry on a camping trip for Christian, the eldest brother, and that sets off a chain of events that leads each brother on an adventure of keeping the town safe from the dark shifters and finding their mates!

If you like paranormal romance with danger, action, and heart-pounding romance, then you won’t want to miss The Holbrook Brothers Shifters series. Grab your copy today!

Wild Temptations
When a trip to the great outdoors goes horribly wrong, a small-town ER nurse soon finds herself with more than she can handle.
Christian Holbrook is looking forward to a quiet, relaxing weekend of fishing with his brothers, complete with their usual jokes about his lacklustre love life. But when he discovers a mysterious cave hidden deep among the trees, the creature that lurks within changes his life forever.
Libby Grimes is an ER nurse in a small country town. Tasked with the stressful job of caring for her wheelchair-bound mother, her long days and sleepless nights are haunted by the strange disappearance of her father. She knows he wouldn’t abandon them – but all her clues led to dead-ends.
When Christian checks into her hospital, her mystery takes a new turn. Libby soon finds herself drawn to him.
As their feelings grow, can Libby she help Christian overcome the darkness forming inside him? Or will his new powers be her end?

Finding the Wolf
Two artists brought together by a dangerous world of wolf shifters.
Eric Holbrook lived for the perfect shot. He dedicates his life to the moments when everything is flawless and the planets seem to align. But growing up in small-town America, he struggles to break from his future of hometown newspapers and an ex happily married to his boss.
When his chase for the perfect picture drives him toward secrets he never thought possible, he soon ends up thrust into a dangerous world of shifters.
Misty Miller finds herself once again in her hometown, miles away from her art career in Chicago. Finding refuge in clay, wire and metal, she hopes the country setting will breathe inspiration into her work. But when Eric lands on her front porch, her art soon falls to the sidelines.
Through the fur and fangs, Misty finds herself clawing to keep him grounded – and struggling to make sense of the new reality that has revealed itself to her. As their bond strengthens, will lust and discovery be enough to see them through the fear and danger that the shifter world brings? Or will Eric’s drive end up being more than just the death of his career?

A Dangerous Curiosity
She’s a big-city girl with a dark secret. He’s a small-town guy destined to become a wolf shifter.
Brighton Holbrook had everything planned for his future – a good education, a family company, and supportive brothers. But when his brothers begin acting strangely, he becomes determined to find out what they’re hiding. And when he discovers their secret, there’s no going back.
Lily Tucker is a city girl, groomed to take over her family’s business. But when her grandmother falls ill, she’s forced to travel to a small country town to care for her – and to protect her family’s dark secrets.
She expected a quiet, boring town, but it soon becomes anything but when Brighton walks into the bar. He’s handsome, wild, and the spark between them is instantaneous. After a night of flirtation and alcohol, her family secrets start to look tame compared to the mess of fangs and fur that stands in her living room.
Even through the shock, Lily can feel the pull between them.
Can Lily help Brighton learn to tame the wild beast inside of him? Or will his pride jeopardize his life and expose Lily’s secrets to the world?