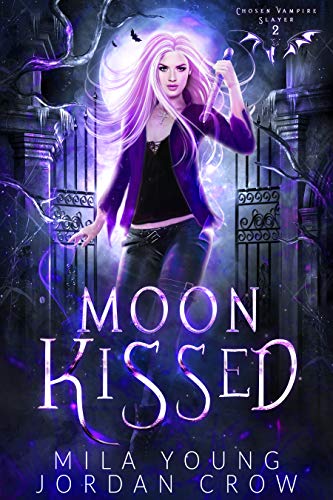 But that’s not the only problem I’ve got. Someone or something is killing off the humans in Anchorage... and the fallout is landing right on our shoulders.

Or at least on those of us left.

Seth has vanished. I refuse to believe he’s gone for good. I won’t. If I have to go through heaven and hell to find him, that’s just what I’ll do. I owe him that.

And I’m on it as hot and heavy as the growing attraction between me and the monsters I’ve fallen for. Which is more than complicated. And could use some of my time...

But I’ve got none.

Another monster, one hidden in the shadows, is making it his business to get in my way. Which means the boys and I have our hands full just surviving another day. And things are only getting worse.

There’s something coming for me, and it won’t stop until I’m dead.

Moon Kissed is the second book in the Chosen Vampire Slayer series.

This is your kind of book if you love kick-ass heroines with sass to match, scorching hot monsters who take what they want, and is perfect for devourers of enemies to lovers books. Expect steam, action, and a supernatural world filled with vampires, demons, shifters, angels... and unhinged alphas who will do anything to protect their woman. Lovers of Anita Blake and True Blood, this is your next addiction.