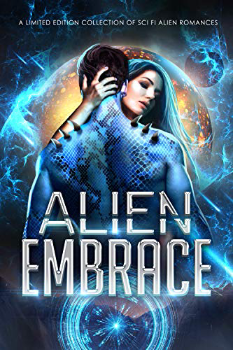 Kurt poured the dark liquid into a silver canister. “That will be forty-seven credits.”

“Allow me,” A masculine voice said.

Tara turned to decline the man’s offer. Her voice caught in her throat as she stared into bright violet eyes. His white shirt clung to his muscular body, but it didn’t completely hide the black tattoo, wrapped around his neck. Everyone speculated about the alien’s markings, yet no explanation had ever been forthcoming. “Voran.”

Voran held out his hand. “You have me at a disadvantage. May I have the pleasure of your name?”

She shook his hand, forcing herself not to pull back when a warm sensation traveled up her arm.

“Tara Nightstar.” She politely retracted her hand after his thumb slid over her skin in a light caress. “Everyone knows who you are, Voran. As the last of your kind, you are required reading at the academy.”

Voran glanced toward the assignment building. “Not just the academy. I recently read a document titled ‘How To Avoid An Apocalypse,’ it was rumored to have been written by a Talkanian traveler who visited your world centuries before my arrival.”

Tara huffed. “Probably bullshit. Before the monetary equality laws, people would write about anything to make a buck. Your arrival and the death of your home world was big news.”

He flinched before meeting her gaze. “Kurt, put Tara’s order on my account.” His eyes bored into her. They flickered with white and black sparks within the violet. “You have a very important role in the events to come.”

Her heart stuttered as she fought the sensation to touch his black hair as it fluttered in the wind. He was tall, stunning, and sexy. Women fantasized about him, but in the hundreds of years he had called earth home, there was not a single report of him in a relationship.

“I take it you are privy to my first assignment.”

His voice dropped, forcing her to lean forward. “This will be your first and your last assignment.”

She was going to die. It was always a possibility. She had chosen dangerous when she had filled out her academy application. Her first instinct was to deny his accusation, but he had never been wrong since he had lived on earth. She turned back to Kurt. “Give me a full Columbian and put it on Voran’s account.”

Voran nodded, then walked toward the building. “I will see you soon, Tara.”

She took the silver canister. “How much was that?”

“Good.” She followed Voran, wondering what flowery words the Alliance would use before sending her to her death.