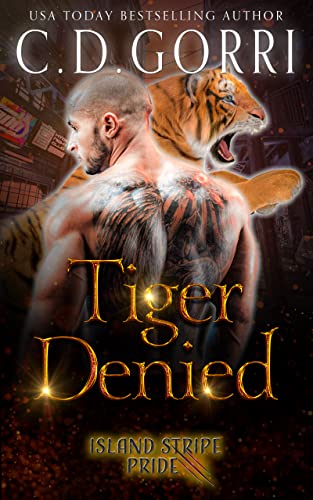 She shoved him away once, but this Tiger won’t be denied….

Every year the Island Stripe Pride hosts a gathering for the other local Shifter groups at their mountain resort in upstate New York. Pride Enforcer Carter Marrow has been asked to organize the enormous event to ensure everything goes harmoniously.

When the catering company pulls out, he must find a replacement chef. But there’s only one capable of pulling off that kind of job last minute. And she hates his guts. Antonia Casabella is the one woman in the entire world he swore he’d never speak to again. Is he willing to swallow his pride for the sake of the gathering?

Toni spent her youth wasting away the days with the local Tigers in the area. Living near the Island Stripe Mountain Resort, what else was there to do? Though rare in the supernatural world for prey to mix with predator, as the years rolled by Toni found herself wishing to be more than friends with one particular Tiger.

Denying her heart was difficult, but she’d had no choice for her father’s sake. After he passed, Toni refused to find a mate among her Flock, finding an outlet for her grief in her work.

When Carter suddenly appears looking to hire her for a special event at the resort, she is intrigued.
Can this Bunny hold her own against a group of less than friendly Big Cats?