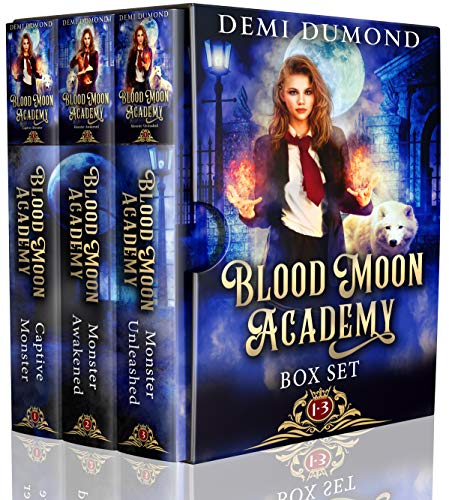 A hot-as-hell fallen angel, a sexy vampire, and a wolf shifter who thinks I'm his mate. I've been warned to stay away from them. Where's the fun in that?

I thought magic only existed in movies. Turns out I was wrong. It does exist, and it's illegal to use it in the mortal world. Oops. So now I've been sent to Blood Moon Academy to figure out this whole magic thing. The problem is, I've got three strike against me before even setting foot in a classroom:

Strike 1: I got the lowest score ever on the magic placement test. FML.

Strike 3: I seem to have woken up a monster with my arrival. Go me.

When the body count rises, I'll have to prove my innocence before the headmaster throws me in a dungeon or the students take matters into their own hands.

It's a good thing there are some smoking hot distractions around.

But my dark magic is only getting darker, and forbidden magic is taking over. The only question is will it kill me or save me in the end? According to the prophecy I’m either the savior, the martyr, or the monster.

There’s only one way to find out if I’m going to live to see my happily ever after.

This box set contains all three novels in the Blood Moon Academy series.