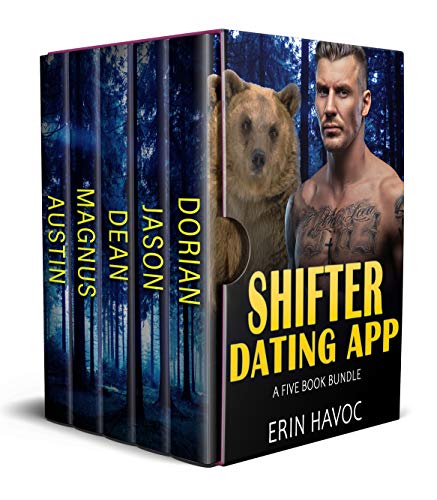 A FIVE-BOOK COLLECTION! LIMITED TIME ONLY!

Shifter Dating App - Book 1: DORIAN
Bella has seen too much of the internet to fall into any scam. So when she receives the beta of this app that promises to find your perfect match, she’s unsure it’s for real. When her result comes as a handsome bear-shifter, she knows someone’s catfishing her.
Dorian has the challenge of convincing her he’s both real and her true match. Will he be able to keep his mate?

Shifter Dating App - Book 2: JASON
Meghan loves the Shifter Dating App and uses it to meet shifters before finding The One. Turns out the app tells her The One is an alpha wolf, the only kind of guy she despises. Protective is one thing, but alphas? Alphas are a no-no.
Jason had a mate for two minutes before she blocked him. He’ll turn the world upside-down to find her again.

Shifter Dating App - Book 3: DEAN
Natalie is the creator of the app. She’s a human, but a passionate advocate for shifter rights. Imagine her disappointment when her mate doesn’t sound as passionate as she is.
Dean’s been hurt before. By other shifters. He doesn’t trust easily and prefers being a lone wolf. Until he meets his mate. Then everything changes.

Shifter Dating App - Book 4: MAGNUS
Karen hates the idea of fake dating someone. Even more when she has a crush on the person. She’s truly afraid of falling in love for real when the panther shifter walks into her life.
Magnus fought for what’s right his entire life. Now, he’s going to have to fight for his mate. And he’ll have to make sure he keeps her safe, even if it means not having her.

Shifter Dating App - Book 5: AUSTIN
Vivian’s got her dream job photographing the first Fire Station comprised of shifters. What she doesn’t expect is to find the one man she ever loved. The one who broke her heart.
Austin met his mate when they were young. To keep her safe, he left her behind. He has a second chance... But will she want him when she learns he's lied about turning into a fox? Will she want him back?