Evening With the Enemy 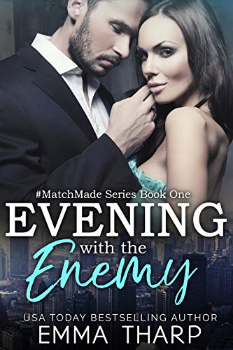 Two things she knows to be true. Never mix business with pleasure and definitely, never, ever date the enemy. So why did the matchmaker set her up to break all the rules? And the bigger question is how could she possibly like it so much?

Lily’s best friend, Savannah, is thrilled to be opening a matchmaking agency and set up all her friends—whether they like it or not. Lily doesn’t believe in matchmaking or matchmakers in general. Hell, these days she isn’t even sure she believes in marriage. Being a counselor, who writes a dating and relationship column in a popular women’s magazine, she sees relationships at their very worst. Imagine her surprise when she gets her match and it’s her nemesis at the magazine, Oliver Sanders. He’s arrogant and pig-headed. No way in hell is she going to date him, except she made a promise to her friend. Three dates. One terrible man. Once it’s over, she’ll have a lifetime of freedom from Savannah’s meddling.

When Oliver’s editor gives him an assignment to join the new startup matchmaking agency, he wants to refuse. He knows nothing about dating, but it’s an assignment and he can’t say no. Now he has to sign up, get matched, and write about it. The bright side? Lily Beck is his match and she’s gorgeous, driven, and intelligent. The downside? She’s also a nightmare. At least he only has to survive three dates.

Lily has a plan; to get in and get out unscathed. Oliver thinks this is a disaster waiting to happen. When the two of them get together, neither is prepared for three dates that change them both. What happens when they start falling for each other and the three dates are over?

Fans of KA Linde and Tijan will be enthralled by Evening With The Enemy from USA Today bestselling author, Emma Tharp.