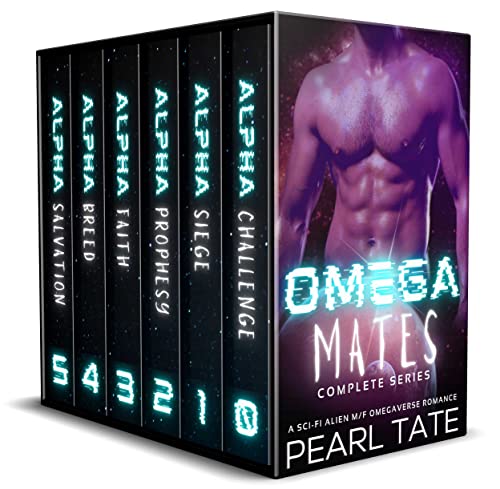 Six Alphas are stunned as their prayers are answered, and Omegas are miraculously delivered to them from the sky...

Six women wake up above a strange purple planet, and even though they split up and come down to the surface one by one, they’re quickly found by various encampment leader Alphas who will do anything to protect them.

Someone abducted me from Earth, operated on my head, and then dumped me on a purple planet!

I don’t remember getting abducted… or sent here. I just wake up from an amazing dream about my grandmother—and I’m here.

Was the dream prophetic? Is this purple alien really mine?

But why here? And just where is here?

I can’t remember what happened leading up to my abduction by aliens, but I sure remember waking up!

I’m trapped inside a tiny, clear spacecraft, heading to the surface of a planet that doesn’t look familiar. Everyone with me is just as confused as we barrel through the sky in the individual pods we are strapped inside, back to back.

Then, my pod shoots out from the others, and I’m on my own! After that, it doesn’t take long to run into the local inhabitants—but of course, I run from them! They’re… not human, but I realize I can understand them. Could that have something to do with the gnarly scar on the back of my head?

According to the alien that’s now dragging me around and punishing me like a child, I belong to him. He’s smoking hot even though he’s purple, but his possessive streak is a little over the top...

Aliens abducted me from Earth, operated on my head, and then dumped me and five other women into a spacecraft hurtling toward a purple planet!

I woke up to screaming because one woman appears hurt. Either from the spacecraft malfunctioning or it shot us! It’s hard to say for sure, but then my tiny craft shoots off on its own.

When I land, I’m greeted by a humanoid alien who’s convinced I fulfill a Prophesy in his religion. Of course, I’m thankful I can understand him but extremely uncomfortable with the strange way my body responds to him. Based on my veterinarian background, the natives are more animalistic than I’m comfortable being attracted to. Could my reactions have something to do with the surgical scar on the back of my skull?

According to the alien that’s hiding me away, he can prove the Prophesy with his Holy Scriptures and help me find the other Earth women. I want to trust him, but I’m not sure I can trust myself to resist the magnetic attraction that burns between us…

When I realized aliens abducted me from Earth, I’m angry. How dare they pull me from my structured life and dump me on a purple planet with no explanation! What the hell?

But from the time I land, I’m running for my life. Petrified and completely disoriented, I stumble into some ruins to hide out. It’s hard to believe that someone would go to the trouble of sending me here, only to let me get eaten by the local wildlife.

When I’m found by a huge purple alien, he’s livid, declaring I’m trespassing on sacred ground. But when he falls to the floor convulsing, I don’t run. I’m too distracted by the glowing column of light that pulls me closer, finally telling me why I’m here.

Unfortunately, I’m supposed to find a “mate” too. The purple alien named Adan continues to act super formal, giving me vague answers about what mating even means. How can he deny the attraction between us when he’s all I can think about? Doesn’t he feel the strange pull between us? Or is it just me?