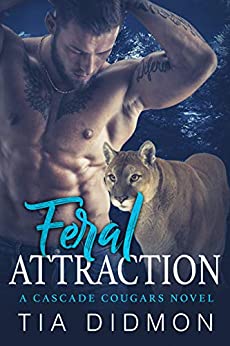 Anna braced for the attack. She expected pain, not the nudge against her head. The cat sniffing her seemed curious more than angry. She tried to avoid the shifters and knew firsthand how dangerous they could be. The massive feline, rubbing his head along her shoulder, felt anything but. Fear was an excellent motivator, and she wasn’t about to miss out on a chance to escape.

She rolled onto her stomach, pulling her legs under her. Her fingers dug into the moss-laden earth. The woodsy smell infiltrated her nose, reminding her of her wild surroundings. The cat rubbed against her side, spiking her adrenaline. She launched forward with agility that matched the animal beside her.

Anna sprinted through the forest. She couldn’t hear the cougar running behind her, but she felt him as she ran through the trees with blinding speed. Branches swayed and whipped past her in a flurry of black and green. She had a shred of hope, a belief that she could somehow outrun the ferocious creature hunting her, but a thick branch whipped back, slicing her neck. The momentum sent her off balance. She hit the dirt with a thud, sliding across the moss and fallen branches, sending her goggles flying into the brush.

She kept her head down, surprised when powerful hands grasped her arms and pulled her to her feet. He turned her around to quickly; the action made her stomach roll and her hands latch onto the muscled chest before her. She was greeted by the most amazing blue eyes she had ever seen. They were wild, angry and beautiful.

He pulled her against his hard body. “Whatever Kevin sent you to steal, wasn’t worth your life.”

Anna looked into the feral eyes of Liam Cascade. She had researched every member of the lair and knew each by name. “Actually, it was.”

His eyes flashed amber. “Why?”

She shook her head. “Doesn’t matter. I will give you the device and tell you what I know if you make me one promise.”

Liam huffed. “You are not in a position to negotiate.”

Anna instilled a firmness in her voice she didn’t feel. One last negotiation before her world went up in flames. She could do this. She had to. “I’m not asking you to spare my life. I’m only asking you to notify Camilla Cortez you caught me... killed me.”

He growled low, sending a rush of excitement through her body. Was that fear? Attraction? Was she so messed up from her past, that her first experience of arousal would be with a man about to kill her?

Liam turned her head to the side, glancing at her wound. “That branch scratched you. We need to get that dressed. What’s your name?”

She stumbled beside him as he turned her toward the direction they had come. She tried to keep her eyes averted, but it was hard not to notice the flex of his thigh muscles as he led her naked through the forest. “It’s Anna.”

“I want that device, Anna.”

“Will you notify Camilla you...”

His eyes flashed yellow, burning away the night away. The animal beneath the man, making its presence known. “No one will hurt you, Anna.”

“Are you going to let me go?” she asked. They couldn’t understand the repercussions of such an action. They had to kill her.

She took a long breath. “A prisoner then.” This was an outcome she hadn’t considered. The people she stole from would have killed her if caught. He stopped as two other men, wearing only jeans, met them at the ridge of the trees. She recognized Garrett from her research, but not the large man beside him.

Garrett held out his hand. “Give me what you stole.”

She unzipped the thin vest she wore over her neoprene suit, taking the small device out and handed it to Garrett. “I don’t know what’s on it.”

Garrett turned it over in his hands. “I will find out. Where was this located? How did you get inside the Faraday cage?”

“I didn’t. Your dad built the lab and the cage, but you called an electrician to do some electrical work after construction. He installed the device inside the door. I popped off the panel to retrieve it.”

Garrett shook his head. “Kallan seems to be able to bribe everyone.”

“He doesn’t bribe them. He threatens them and their family.”

Garrett nodded. “Judd, do you want to escort our thief to the freezer? Luca wants Liam to check in with Talen.

Liam growled. “I will escort Anna.”

Jed and Garrett exchanged a look before the large man rubbed his chin. “I will stop by and talk to Talen. I wanted to check on Marie before I head home, anyway.”

She felt the tension in the air. Could almost smell it.

Jed looked her over. While they trained her to interpret people’s emotions and actions, there was something in the way he looked at her that made her swallow hard. “You okay here, Liam?”

Liam nodded. “I will take care of Anna.”

Jed left without another word as they followed Garrett back to the lab.

Garrett went to the door outside the Faraday cage. His fingers traced the slight scratch her chisel had left. “I was so focused on the cage, I never considered a recorder inside the construction. It’s ingenious, but it can’t transmit. It had to be retrieved. Kallan must have figured he could get it.”

Liam huffed. “I can’t smell her and even knowing she was coming we almost missed her. She would have gotten it if we hadn’t been tipped off.”

She sucked in a breath. “Someone tipped you off?”

Liam’s face went hard. “Don’t tell me you’re surprised someone betrayed you. What do you expect when you resort to a life of crime?”

She let the rebuke roll off her. “I wasn’t betrayed, Kevin was, and that is surprising. Most people fear him, and for good reason.”

Garrett plugged the device into a computer on the table. “It’s encrypted.”

Liam turned to her with glowing eyes. “Do you know the password?”

She felt like she was falling into his crystal gaze. Her body swayed before she blinked rapidly. “No.”

He frowned. “Is my family in danger?”

She shook her head, confused by his words. “I’m a thief, not a killer.”

“Did Kevin send anyone else?”

She wet her dry lips, trying to fight the fuzziness in her head. “Not yet, but he will when he finds out I failed.”

She wanted to nod her head, but the room was losing focus. “Yes.”

Another man entered the room. He was looking down at her before she recognized who he was. Talen Cascade. Leader of the lair. “What’s your full name?”

She looked down because she no longer had the strength to meet his gaze. Her neck throbbed and she could feel warm liquid running down her chest, inside her suit.

Talen glanced at the computer. “Lock her up until we figure out what is on that device.”

Talen’s eyes flared. “Are you kidding me? I know she is a woman. We won’t hurt her, but she is a fucking Kallan spy.”

Liam nods. “I know what she is, but I will take her to my house. I take full responsibility for her.”

Talen rubbed his forehead. “Why would you take that chance?”

“Because, the thief is my mate.”