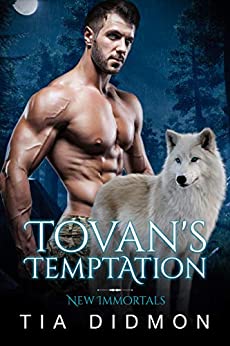 Tovan pulled the knife from his shoulder. He barely registered the pain, but his dormant wolf rose inside him, sniffing the forest air before returning to his slumber. He had forgotten the feeling of duality. The brief connection with his animal made him pause, searching for the cause of its curiosity.

Kiki twirled another knife through her fingers. She was as agile as she was deadly. “You okay, Tovan? I hope you aren’t going soft on me.”

Tovan stared at his brother’s mate. “It was a momentary distraction.” While he admired Kiki, he hoped his own mate would be like the mother Jordane had described. One with compassion and kindness. Everything he was not. He had failed the warrior trials.

He had passed every test, yet Ariel’s crystal would not merge with him. His fallen brother had denied him warrior status until Jordane had threatened to abdicate his future as leader of the warriors. Jordane had sacrificed everything for him. He owed his brother everything. His life, his crystal, and his soul. Jordane had tasked him with Kiki’s training and he could do nothing but comply.

Jordane approached the clearing that Tovan and Kiki were sparring in. He glanced up at the evergreens as he shook his head. “You could have stopped that Tovan. Are you going easy on her because she is my mate or because she is pregnant?”

Kiki crossed her arms. “If you think I will stop training because Jordane knocked me up, you’re kidding yourself. I’m not even showing yet.”

Jordane huffed. “I have asked you repeatedly not to use that term when referring to your pregnancy.”

Kiki shrugged. “I can always get a bumper sticker that says demon on board.”

Jordane pinched the bridge of his nose. “Dammit, Kiki.”

Tovan felt a flicker of amusement. While his demon remained dormant, his wolf sent a mental image before returning to its slumber. The brief connection reminded him of his childhood, growing up with Jordane. His brother teaching him, training him to be a warrior. “It isn’t her.”

Tovan looked at him with concern. “Then why did you fail to block her attack? You could have deflected the knife or simply stopped it in midair.”

“My animal would not allow it.”

Jordane’s eyes flashed green. “Your demon is not awake. I would sense it.”

Tovan nodded. “He is not but my wolf has stirred, if only briefly.”

“Do you know what caused it?” Jordane asked.

“I have had moments of sensation but I didn’t understand what had caused it until today.”

“It’s Kiki. I’m not sure if its just her presence or her pregnancy, but I can’t fight her as a warrior.”

Jordane nodded. “It is the same for me. I assumed since you are not her mate, you would be able to. I should have known Ariel would not allow you to touch her, even in training.”

Kiki shook her head. “It isn’t an actual fight. How’s a girl supposed to learn her new warrior skills if neither of you will fight me?”

Jordane sighed. “I will have one of the others take up your training but you have to understand that everyone will hold back during...”

Jordane glanced at his brother. “I am well aware of your abilities, my love.”

Kiki said nothing, but her body language was one of total defiance.

Jordane rubbed his chin. “Has your animal given you any other indications?”

“He sent me an image while Kiki and I were sparring.”

Kiki stepped forward, her interest piqued. “What was it?”

“It was a flash of you and your PIA badge. I do not know what it means.”

Kiki tapped her lip. “You can only mate a woman with high psychic ability. It’s likely she will be an employee of the PIA in some capacity.”

Tovan wiped the bloody blade on his shirt. “Let’s hope she prefers baking to knives.”

Kiki scrunched her face. “Ha ha.” She smiled wickedly. “Don’t worry, I can always train her.”

“You are a very disagreeable woman,” Tovan said.

Kiki smiled, grabbing her phone when it chimed. The smile died on her face as she read the text. “I have to go. Someone attacked Derek. All agents are on deck.”

Jordane growled. “You are pregnant. Marcus agreed you should not be in the field.”

Kiki’s hand went to her weapon. “I am going to Derek’s apartment, with or without you.”

Tovan put his hand on his brother’s arm. “Allow me to assist you, my brother.”

Jordane’s eyes remained on his mate. “Where is Derek’s apartment?”

Kiki hand pulled away from her weapon. “It’s in the Davidson building. Diane and Jenner are already there with a team.”

Tovan walked over to the SUV parked near the clearing. He opened the door, motioning Kiki to get inside.

Kiki slipped into the back seat. “At least someone hasn’t forgotten his manners.”

Tovan looked down at her. “I would never give my mate the leeway Jordane gives you.” He closed the door as Kiki flipped him her middle finger.

Tovan looked around the beige apartment. It was identical to Kiki’s though she hadn’t stayed in her suite since she had bonded with Jordane. The smashed glass marred the pristine surroundings and accented the pooled blood beside the oak coffee table. He glanced back at the door, looking for forced entry, but none was evident. “We are on the second floor. Is there a fire escape?”

Kiki nodded. “Senator Davidson didn’t want them, but they are a safety regulation for new buildings. There is a drop-down ladder outside the window but it isn’t accessible from the ground.”

They made their way to the window, glancing down, to determine if the intruder had released the ladder. “Someone used this to escape but Derek must have allowed them access to the building.”

Jordane gave his brother a warning look. He was concerned about Kiki’s anger. An emotional woman who had just merged with her crystal was a recipe for disaster. No one wanted to see what kind of damage a pregnant female warrior could do. “I want to talk to Jenner.”

Tovan nodded. “I will stay with Kiki.”

Jordane exited to the hall where they had seen Jenner talking to several members of the death squad.

“So were Valen and Laura when they visited PIA headquarters.”

Kiki stopped a junior agent wearing blue gloves and a black jacket with the PIA logo on it. “Do you know where Diane is?”

He nodded. “She is in Dirk’s bedroom.”

Kiki cleared her throat. “He goes by Derek now.”

The agent shrugged. “You can change your name but you can’t change the past. Anyone who worked with him knows who and what he is.” The man returned to collecting evidence.

Tovan expected Kiki to be mad, but her face held shame and uncertainty. “What did he mean by that?”

Kiki sighed. “Derek’s nickname while growing up was Dirk. It was his father’s name as well. When he got hooked on opiates, he earned the name Dirk the jerk, but when he got clean, he resumed using his given name.”

“Is his drug use tied to this attack?”

Kiki pointed to the bedroom. “Diane is the only one who can answer that.”

Tovan followed Kiki to the gray bedroom with a double bed and white sheets. Diane had her back to them reading a text on her phone.

Kiki put her arm on Diane’s back. “You okay?”

Diane turned, putting her phone into the pocket of her black Flack jacket. The white logo was identical to Kiki’s. “Yeah, just disappointed.”

Kiki nodded. “Derek is a fighter. He will pull through.”

Diane took a prescription bottle from the dresser, passing it to Kiki.

Diane shook her head. “He promised me he wasn’t. He seemed so clear the last couple months.”

Tovan felt his body heat as her whispered words scorched his skin. Electricity ignited in his blood as his wolf opened its eyes, looking for the source of its desire. He hadn’t had trouble controlling his temperature since he was a child, but as the waves of heat distorted the surrounding air, he closed his eyes, attempting to gain control of his rising emotions. He connected with his animal, looking for the source of its reaction. One he hadn’t had in hundreds of years.

Diane turned as his demon opened its eyes. Her dark hair was tied into a severe bun, leaving her large brown eyes exposed. Her light skin tone was dusted with pink, though it was obvious she didn’t wear makeup. She was tall and though her stance gave the impression of having an athletic build, her black tactical gear made it impossible to distinguish her feminine features.

Kiki glanced around the room. “Where was Derek attacked?”

Diane pointed to the bathroom. “The fight started in there.”

The ladies entered the bathroom as Tovan’s demon roared to the surface, uttering its first words in hundreds of years. MINE.

Get the full story here.